A $1 million investment by the Kentucky General Assembly to provide public school teachers with a humane quality of life in retirement now has resulted in — almost 80 years later — Kentucky’s largest financial institution with about $17.5 billion in assets and that annually injects about $1.7 billion into the commonwealth’s economy from pension benefits. 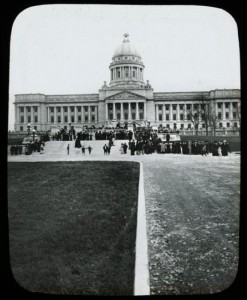 The first Teachers’ Retirement System office was in the Capitol.

The establishment of the Teachers’ Retirement System of the State of Kentucky followed a 1936 University of Kentucky study that found teachers could not afford to retire. Because of this, older teachers continued working, in spite of some being physically or mentally disabled. Teachers were not allowed to participate in Social Security, and Kentucky schools found it difficult to attract and retain teachers.

As a result, the General Assembly created the Teachers’ Retirement System of the State of Kentucky as a defined benefit retirement plan in 1938 to provide retirement security for an at-risk population. Two years later, in 1940, operations began after the retirement system received initial funding from the General Assembly of $1 million (about $17 million in 2016 dollars). Monthly annuities have been paid to retirees ever since.

The legislature, from the inception of TRS, put control of the institution in a board of trustees primarily elected by the membership. Day-to-day oversight is entrusted to an executive secretary. Only five people in 75 years have occupied the position, which is similar to a chief executive. That’s an average tenure of, now, more than 15 years.

Members include local school teachers and educators at five state universities, the Kentucky Community and Technical College System and education agencies. The five universities all have experience as teacher colleges; thus their inclusion in TRS.

Why not Social Security for school teachers?

About 5% of TRS members are in Social Security — and their pension benefits and contributions are reduced accordingly.

In the 1950s, university members voted to be in Social Security. Around that time, talk of a similar move for teachers circulated but didn’t get far amid a concern then that Social Security could be too expensive for the state.

In an Oct. 5, 1954, letter, Gov. Lawrence Wetherby wrote: “It is estimated that if the members or a majority of the teachers in the Kentucky retirement system vote to come under Social Security, the state legislature would have to find $1 million of new money annually to finance the state’s employer contribution to the Social Security fund. Under our present revenue-producing system, the legislature would encounter serious difficulty in locating a sum of new money to bring the teachers into the Social Security program.”